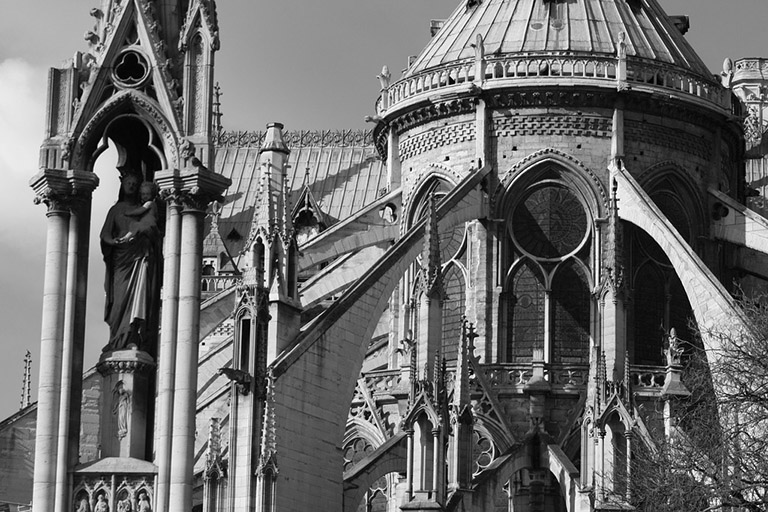 Prerequisite: See bulletin, or obtain permission from the director of undergraduate studies.

On April 15, 2019, Notre-Dame de Paris caught fire. The world watched in horror as flames slowly demolished the entire wood-beam framework under the roof of the nave, toppling the spire, and smoke poured from the stained glass rose windows. Late that night, after the fire was tamed, French President Macron announced intentions to restore the cathedral and in less than a week, over €1 billion were pledged for its reconstruction. The enormous success of this fundraising campaign raises questions about what exactly this building means (and why, and to whom) in the twenty-first century. This interdisciplinary course uses literature, music, and painting to study the life of, in, and around this stone and timber giant, witness to more than 850 years of Parisian history: as a perfect example of medieval high gothic architecture and sculpture and as a contemporary tourist destination; as the site of musical, liturgical, and theological innovation and the heart of the medieval University of Paris, and as a focus of violent anticlerical sentiment during the Revolution; as a muse for painters, poets, and writers, and as a work of art that has undergone numerous restoration projects; as a symbol—of the church, of empire, of the past, of Paris, and perhaps, as we saw during the fire, of Western culture writ large. We will use Notre-Dame de Paris to think about buildings (aesthetics, function, and monumentalism) and their cultural importance (social, political, religious).